The two-part oversight exercise will begin with a meeting where the committee will receive reports on the state of the following transit camps:

The second phase will be the visits by Members of the Portfolio Committee and other stakeholders to the abovementioned transit camps. Details of the briefing meeting are as follows:

Members of the media are invited to attend and report accordingly. For more information please contact Wonder Hlongwa at 0829083532.

The Chairperson of the Portfolio Committee on Agriculture and Rural Development Honourable Ntombikayise Sibhidla-Saphetha has learnt with shock and dismay about the sensational statement issued by the Democratic Alliance’s committee member Honourable Chris Pappas.

Committee members were shocked that Hon Pappas had released a statement even before the committee could take resolutions on the matter.

Department of Community Safety was led by MEC Bheki Ntuli accompanied by SAPS’ General Jula and Brigadier Kheswa. Both the department and SAPS explained in detail challenges facing rural communities including farm labour tenants and both black and white farmers.

The meeting was convened by Honourable Sibhidla-Saphetha in her capacity as the Chairperson of Agriculture and Rural Development and Honourable Mthethwa who is the Chairperson of Community Safety Portfolio Committee. Mthethwa was unable to attend because of other commitments but Members of the Community Safety Portfolio Committee were in attendance.

The Committee has resolved to institute an investigation into the conduct of Honourable Pappas for violating the Legislature’s standing Rules.

Rule 153 clearly states that only the Chairperson of a committee may make media statement and broadcast or internet and other electronic publications on behalf of a committee.

The Rule further adds that Media Statements, broadcasts, internet or other electronic publications, whether made by the Chairperson pursuant to sub-rule(1) or by individual Members may not:

i) Misrepresent any proceedings or reports of a committee or any documents, evidence, submissions or information before a committee or the views of other Members; or

ii) Purport to represent the views or a report of a committee where it does not.

Committee Members were shocked at Pappas’ misrepresentations of the committee deliberations including his assertion that “the DA is pleased to have the support of the SAPS in its campaign to declare farm murders a hate crime”.

The committee has resolved to investigate the contents of Pappas’ statement and take appropriate action. Once the committee has taken resolutions on this matter it will make these available to the public.

Issued by the Chairperson of the KZN Legislature’s Portfolio Committee on Agriculture and Rural Development Hon NN Sibhidla-Saphetha Cell No: 0833013622 or Mr Wonder Hlongwa at 0829083532.

Paying tribute, Speaker of the KwaZulu-Natal Legislature, Nontembeko Boyce said we were still expecting a lot from him having served in the local government for 8 years.

“I would like to express our great sadness on behalf of the Legislature. Our sincere and deepest condolences go out to his family, his party the African National Congress, the KZN Legislature Family and the people of KwaZulu-Natal”. Added Boyce

“Honorable Mthembu understood the importance of the oversight responsibility on the Cooperative Governance and Traditional Affairs Portfolio Committee as a legislator and carried out its responsibilities with dignity”. Said Boyce

He also contributed greatly not only to ensuring that the department fulfils its mandate, but to the efforts to ensure improved delivery of services to communities.

His contribution will be dearly missed by all of us. May his soul rest in internal peace.

ISSUED BY THE KWAZULU-NATAL LEGISLATURE OFFICE OF THE SPEAKER

Members of the KwaZulu-Natal Legislature this morning are visiting schools throughout the province to assess their state of readiness after more than two months of closure due to the COVID-19 pandemic.

The visits, which begins today and end on the 11th of June 2020, are part of the legislature’s oversight responsibility.

These visits are taking place for the first time since the outbreak of the COVID-19 pandemic.

Due to the outbreak of the pandemic, teams will be much smaller than in the previous years for the purposes of observing the COVID-19 Regulations which include maintaining social distance during the meetings.

Honourable Members are checking various issues including schools’ readiness and the provision of essentials such as Personal Protective Equipment (PPEs), sanitizers and the new sitting arrangements in the classrooms in line with the Department of Basic Education directive issued before the reopening of the schools. 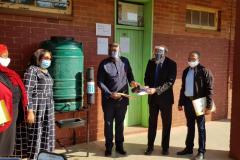 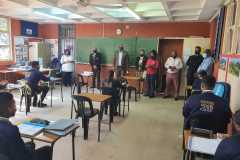 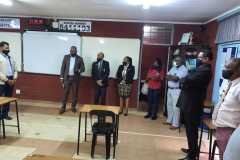 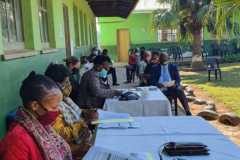 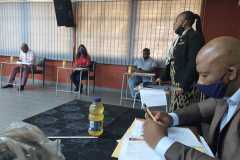 2020 WORKERS PARLIAMENT REACHES OUT THE NEEDY AND VULNERABLE WORKERS

Amid Covid-19 the annual workers Parliament was moved beyond virtual debate to the most affected rural workers who are most hit by the impact of the pandemic. These workers received the most needed tangible support in the form of Personal Protective Equipment (PPEs), Hand Sanitizers, Masks in the early hours of the morning of the 27 May 2020. It was the view of the Federations, namely, COSATU, NCTU and FEDUSA that the unity of the working class during this difficult time in the labor market can better be demonstrated by the workers lending a hand in the communities where life- saving protective equipment is running low, as there is an increased demand of these.

These are the workers that face the most challenges as they live in poor communities and work in industries that are mostly volatile in the time of the pandemic. The workers of Mandini Industrial Areas and Farm workers of Ixopo woke up to receive these protective equipments on their way to work. The Members of the Provincial Legislature and the leaders of the three Federations, hit the ground on the cold morning to give support to these workers.

“This was the continuation of our 2020 Workers Parliament which we held on the 12 May 2020. Our hearts go to the workers like these, and in our struggle for better working conditions and better wages, include the fight against the COVID-19 for every worker”, said COSATU’s Provincial Secretary Edwin Mkhize.

The Speaker leads the team to a farm to lend a hand to the workers.

Farm Workers in Ixopo benefited from the outreach programme as part of the Workers’ Month celebration.

Members hand out Sanitizers in a bid to fight the spread of the virus.
Read More